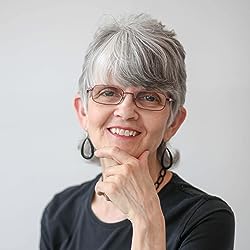 Connie Lacy worked as a radio reporter and news anchor, after dabbling in performing at college and community theater. Those experiences appear in a few of her novels.

Her fascination with climate change led her to imagine a long run future when oceans have risen fifteen feet. That's the backdrop for "The Shade Band Trilogy." Along with her fascination with time travel and the paranormal are all on screen in "The Time Telephone" and "VisionSight: a Book."

Growing up, she lived in Japan and Okinawa where her Army dad was stationed. She graduated with a degree in Journalism and Creative Writing from the University of North Carolina at Pembroke.

She resides in Atlanta with her husband and their goofy dog, Pistol - thus named because he's a real pistol.

Connie Lacy has 1 products available for sale in the category of Paid in Kindle Store.