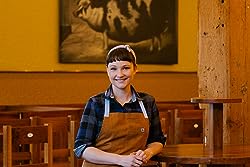 A Seattle native, Dana Cree began her culinary journey from 2000. Cree first worked at the savory side of the kitchen for three years in Seattle’s Lampreia, until heeding her pastry calling. Following a lengthy period at The Fat Duck, in Bray, England in 2005, Cree assumed the role of Pastry Chef and returned to Seattle. There she chased her flavor-focused and detail oriented fashion.

Cree spent a few tremendously powerful weeks gearing with Alex Stupak in WD-50, at New York. She even took the helm at Veil upon returning to Seattle. It was there she researched methods setting to utilize lessons learned at WD-50 and The Fat Duck.

After Veil closed in 2008, Cree joined the opening team in Poppy. There concentrate and she continued to refine on her concepts, crafting fascinating, accessible plates match for the high-volume setting. Her job at Poppy earned her recognition from StarChefs, which presented her.

Cree left Seattle in 2010, and after a point at Noma, at Copenhagen, she returned to the States to operate in Alinea in Chicago. There she learned to push at the bounds of possibility. Cree found herself back on the island of Bornholm since Pastry Chef in Kadeau restaurant, in Denmark. There she immersed herself also a New Nordic chic design along with products.

After Kadeau closed for the brutal Scandinavian chilly, Cree returned to the States, placing herself under the tutelage of both Sherry Yard in Spago Beverly Hills. There she learned to cultivate relationships with area farmers and revisited techniques.

Cree returned to Chicago in 2012 to become Pastry Chef in Blackbird and avec. Nominated by the James Beard Foundation in 2014 and 2015, her thoughtful and resoundingly delicious desserts flawlessly culminat

Dana Cree has 2 products available for sale in the category of Books.