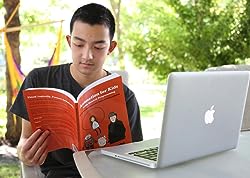 Danny Takeuchi is the writer of Animation for Kids with Scratch Programming, and also the creator of the startup, MentorsCloud.com. He interned for 2 summers in HP R&D lab. Danny is also a collaborator from the Sherlock Holmes & the Web of Things (IoT) global endeavor sponsored by Columbia University's Digital Storytelling Lab which investigates new forms and functions of storytelling. He is part of the team that designs and builds smart storytelling objects, which are plugged into a huge crime scene with places all over the world. The very first crime scene is going to be staged during the 52nd New York Film Festival from September 26th to October 11th.

The thought behind his small business startup, MentorsCloud.com, initially sprouted if a family friend requested Danny to teach his 10-year-old son the way to do computer programming. After that summer, MentorsCloud.com started its first summer camp with 21 students ranging from 8 to 14 years of age. Ever since that time, his staff and Danny introduced over 200 kids in neighborhood facilities, and schools, libraries.

Danny first thought about creating an animation book when he could not find programming books written for younger pupils. Many novels branded "for kids" contained large words and complex theories. He started researching and experimenting ways to teach students, and he found that his curriculum could be followed by kids. After every learning session, confidence was gained by his students and also wanted to do much more. He also found none of this programming book introduced cartoon methods and sprite drawing. His book is going to be the first one to teach kids how to perfect their cartoon and games. The second half will be excellent for Scratch programmers.

Danny harvested his program and beyond teaching experience while writing his book, Cartoon for

Danny J Takeuchi has 1 products available for sale in the category of Books.