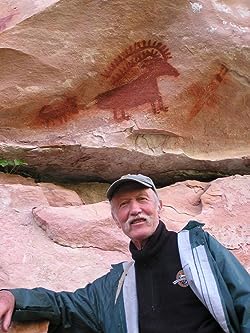 David Grant Noble is a writer, editor, and photographer residing in Santa Fe. He was on the staff of the School for Advanced Research for many years and is Linked to the Archaeological Conservancy. A quick link with his SAR Press novels is http://itpots.sarweb.org

He has long researched the Southwest's profound history and archaeology and traveled widely to photograph ruins, stone art and landscape His books bring new historical and archaeological information to general readers. The first Ruins of the Southwest: an Archaeological Guide, has been in 3 variants for more than 30 years in print. Other titles include From the Places of their Spirits, and In Search of Chaco: New Approaches to an Archaeological Enigma. His novels and many photos can be understood in www.davidgrantnoble.com. Noble’s photographs have been shown in galleries in Santa Fe, New York, San Francisco, and Dallas and accumulated by the Museum of the New York Public Library, the Beinecke Library of Yale University, and New Mexico.

Back in 2003, Noble received the Victor Stoner Award by the Arizona Archaeological and Historical Society in recognition of their "exceptional efforts to bring historical and archaeological awareness of the Southwest to the general public." In 2011, the Western National Parks Association presented him with the Emil Haury Award for "outstanding contributions in scientific study or other pursuits that advance the interpretation and understanding of the natural and cultural resources of western national parks."

David Grant Noble has 2 products available for sale in the category of Books.