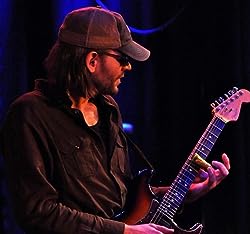 A professional music teacher for two decades, David has educated countless students across the U.S., including classes for the Guitar Center Studios, National Guitar Workshop, School of Rock, along with Ivy Tech College.
David is a contributing writer for Guitar Player and Premier Guitar publications and has written several feature articles and lessons for every novel.

In addition to his educational and teaching background, David has been a touring/performing musician for over half of his life, which began professionally at age 15.
David has shared the stage with an intriguing array of artists and bands from Cheap Trick, Quiet Riot, and Blue Oyster Cult, to the Nitty Gritty Dirt Band, Luke Bryan, Dierks Bentley, and more.

David's preferences and influences from music are wide-ranging and seemingly random, and he's specialized interests in stone, metal, blues, funk, jazz, classicalmusic and acoustic music.
He is independently recorded, published, and disperse eight instrumental guitar albums, including his most recent release 'Faded.'
His other albums include themed-tributes to HP Lovecraft (Cosmic Mind), Edgar Allan Poe (The Raven), as well as the movie game DOOM (Terrestrial Planet). David released a licensed themed tribute to the late-great artist HR Giger (Biomechanik Musik) at 2014.

For much more about David's music visit his own Bandcamp.com profile where you can find All his albums --> davidbrewster.bandcamp.com/

To listen to the latest demos and musings visit David's Soundcloud profile -->
www.soundcloud.com/david-brewster

David M. Brewster has 1 products available for sale in the category of Books.