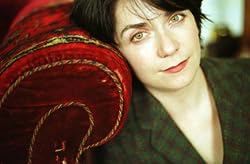 Denise Mina was born in Glasgow. Due to her father's job as a engineer, the family followed the north sea oil boom of the seventies about Europe, moving twenty seven days to the Hague, London, Scotland and Bergen. She also did a range of badly paid occupations and left school: working at bar maid, a meat factory, kitchen porter and cook. Eventually she settle at auxiliary nursing for terminal and geriatric care patients.
At twenty one she passed exams, got into study Law at Glasgow University and went on to research a PhD thesis in Strathclyde University on the ascription of psychological illness to female criminals, teaching criminology and criminal legislation at the mean time.
Misusing her grant she stayed at home and wrote a book, 'Garnethill' if she was supposed to be studying rather.
'Garnethill' won the Crime Writers' Association John Creasy Dagger for the best first crime novel and has been the beginning of a trilogy completed by 'Exile' and 'Resolution'.
A fourth publication followed a stand alone, called 'Sanctum' at the UK and 'Deception' in the united states.

At 2005 'The Field of Blood' was printed, the first of a set of five books following the career and life span of journalist Paddy Meehan from the newsrooms of the early 1980s, through the momentous events of the nineteen nineties. The next in the series was first printed in 2006, 'The Dead Hour' and the third party will follow in 2007.
She also writes comic books and composed 'Hellblazer', the John Constantine string for Vertigo, for a year, released soon as graphic novels called 'Empathy is the Enemy' and 'The Red Right Hand'. She has also composed a one-off graphic novel about stunt murdering and land prices known as 'A Sickness at the Family' (DC Comics forthcoming).
In 2006 she composed her first drama, "Ida Tamson" an adaptation of a brief story that was serialised from the Evening Times over five nights. Th

Denise Mina has 2 products available for sale in the category of Books.