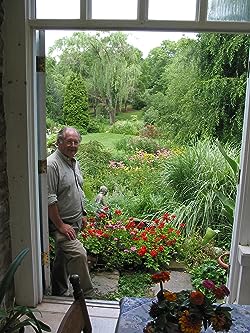 DEREK FELL is the author of over 100 works of non-fiction including books and calendars, dealing mainly with gardens, travel and art. Born and educated in England, he became an American citizen in 1970 and began a string of gardening publications. This led to a series of acclaimed roles concerning the gardens of the Amazing Impressionist painters, Renoir, Monet, Cezanne and Van Gogh. This led to a biography about Vincent Van Gogh, 'Van Gogh's Women' plus a co authored cookbook, 'Monet's Palate Cookbook.' His most popular garden publications contain 'Vegetables - How to Select, Grow and Enjoy, '' 'Grow This,' 'Exotic Gardening' and 'The Gardens of Frank Lloyd Wright.'

Derek is winner of awards from the Garden Writers Association than every other person, and he had been an advisor on vegetable gardening into the White House during the Ford Administration. Derek is now married, with three kids and three grandchildren, and resides at historical Cedaridge Farm, Bucks County, Pennsylvania. He also possesses a house onto frost-free Sanibel Island, Florida at which he cultivates a one-acre tropical backyard a block from the beach. There he grows mainly tropical fruits such as coconuts, bananas, mangoes, avocados and macadamia nuts.

Derek's mentors include O. D. Gallagher, a World War II war correspondent who taught him to compose; Harry Smith, horticultural photographer who instructed him to photograph gardens; and David Burpee dean of American seeds-men, who also instructed him a fantastic deal about gardening in the US when Derek worked six years as Burpee's catalog supervisor.

Derek has written countless garden articles, exemplified by his own photography for leading publications such as Architectural Digest, the New York Times magazine and Connoisseur. Contact Derek at derekfell@verizon.net.

Derek Fell has 3 products available for sale in the category of Books.