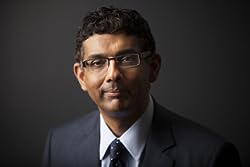 Dinesh D’Souza has had a 25-year livelihood as a writer, scholar, and public intellectual. A former policy analyst at the Reagan White House, D’Souza also functioned as John M. Olin Fellow at the American Enterprise Institute, and the Robert and Karen Rishwain Fellow at the Hoover Institution at Stanford University. He served as the president of King's College in New York City by 2010 to 2012.

Called one of those “leading young public-policy makers in the country” by Investor’s Business Daily, D’Souza quickly became famous as a major influencer on public policy through his writings. His very first book, Illiberal Education (1991), promoted the phenomenon of political correctness in the us’s colleges and universities also became a New York Times bestseller for 15 months. It has been listed among the books of the 1990s.

At 1995, D’Souza released The End of Racism, that became one of the most controversial novels of the time and yet another nationwide bestseller. His 1997 novel, Ronald Reagan: How an Ordinary Man Became an Extraordinary Leader, has been the very first publication to make the case for #x & Reagan2019;s intellectual and political significance. D’Souza’s The Virtue of Prosperity (2000) explored the social and moral implications of riches.

In 2002, D’Souza published his New York Times bestseller What’s So Great About America, that has been critically acclaimed for its thoughtful patriotism. Letters to a Young Conservative, his 2003 book, has become a guide for a new generation of conservatives inspired by D’Souza’s style and thoughts. The Enemy at Home stirred up a discussion both about the left and the best. This was a national bestseller and has been published in paperback in 2008, with a new afterword by the author.

Dinesh DSouza has 2 products available for sale in the category of Books.