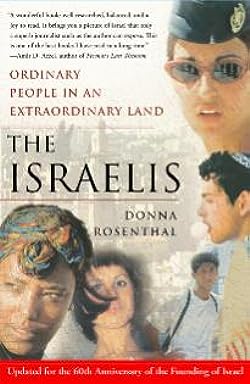 Donna Rosenthal is the author of the 2008 THE ISRAELIS that are updated: Ordinary People in an Extraordinary Land.

She had been motivated to compose THE ISRAELIS when a CNN producer asked her: "Our audiences are perplexed. We have footage of Jews who look like Arabs. We've got black Jews, bearded century gods and women in tight panties. Who are these people?" Regardless of the avalanche of news out of Israel, few men and women know much about contemporary Israelis.

THE ISRAELIS includes more than 100 excellent reviews across the political and religious spectrums.

Donna was a news producer at Israel TV, reporter for Israel Radio and The Jerusalem Post, and a lecturer in the Hebrew University in Jerusalem.

Her articles have appeared in The New York Times, The Washington Post, the Los Angeles Times, Newsweek and The Atlantic and Several other publications.

Donna has been the first journalist to travel to distant Ethiopian mountain villages and introduce Israeli radio crowds to black Jews praying in mud hut synagogues -- to visit the Promised Land.

She frequently is interviewed on tv and radio about contemporary Israel. In an Publishers Weekly national survey, Ms. Rosenthal placed at the TOP TEN many well-known speakers -- and just female non-fiction author.

She holds a BA from University of California Berkeley (Political Science) and a Master of Science (Global Relations/Middle East) in The London School of Economics.

Donna Rosenthal has 1 products available for sale in the category of Books.

Donna Rosenthal is rated 8 out of 10 based on 65 reviews.