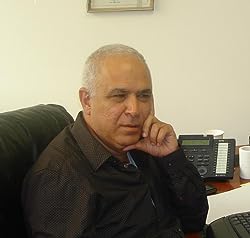 Eli Hai was born in Jerusalem in 1952, four decades after the establishment of the Israeli state. He grow up in a refugee absorption camp at the outskirts of Jerusalem, where his bad family dwelt in tin shack, and spent many of days outside, choosing edible plants in the fields and forbidden fruit from the orchards to feed his appetite, or sneaking to the theatre through the toilet window, in order to watch a movie he couldn’t manage. He had been recruited into the Israeli military with no graduating from high school, also served in the Israeli Air Force. His first Squadron took a fatal hit in the Yom Kippur War, and a huge part of its aircrew was murdered taken captive. By the end of his service, he began to grab on his matriculation exams and got married. He studied Economics and Accounting in the Hebrew University of Jerusalem, with the help of a scholarship that required him volunteer in Ramle Prison, in which he became a tutor for life sentenced prisoners, convicted for murder. Following his graduation he began working for the Israeli Tax Authority, and opened an accountant office, in which he still works to this day. In addition, he worked as a lecturer for both accountancy and taxation for 17 years.
In 2004 he began writing his first novel, which grew out of his strong desire to revisit his loved ones’s past in Iraq. The result, Missing Days, is a strong love story that begins in Iraq from the 1940’s and ends in Israel, in the days following it& ##x2019;therefore liberty. Missing Days received outstanding reviews from the readers, which motivated Eli to keep writing. The outcome is Lies in the Attic, an interesting love story put in modern times, round the U.S and Israel.

Eli Hai has 1 products available for sale in the category of Paid in Kindle Store.