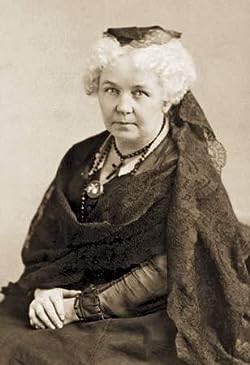 Elizabeth Cady Stanton (November 12, 1815 – October 26, 1902) was an American suffragist, social activist, abolitionist, and leading figure of the early women's rights movement. Her Declaration of Sentiments, presented in the Seneca Falls Convention held in 1848 in Seneca Falls, New York, is often credited with initiating the first organized women's rights and women's suffrage movements in the USA. Stanton was president of the National Woman Suffrage Association from 1892 until 1900.

Before Stanton narrowed her political attention almost exclusively to women's rights, she was an active abolitionist with her husband, Henry Brewster Stanton and cousin, Gerrit Smith. Unlike a lot of those involved with the women's rights movement, Stanton addressed various problems pertaining to women beyond voting rights. Her concerns included women's parental and custody rights, property rights, income and employment rights, divorce, and the financial health of the household, and birth control. She was also an outspoken supporter of the temperance movement.

After the American Civil War, Stanton's devotion to female suffrage led to a schism from the women's rights movement after she, with Susan B. Anthony, diminished to support passing of the Fourteenth and Fifteenth Amendments to the United States Constitution. She opposed giving added legal security and voting rights to African American men while girls, white and black, were denied the exact rights. Her stance on this issue, together with her thoughts on coordinated Christianity and women's issues past voting rights, resulted in the creation of two distinct women's rights organizations which were finally rejoined, together with Stanton as president of the joint business, approximately twenty years after her break out of the first women's suffrage movement. Stanton died in 1902 having authored the Woman's Bible and also her autobiography Eighty Years

Elizabeth Cady Stanton has 2 products available for sale in the category of Books.