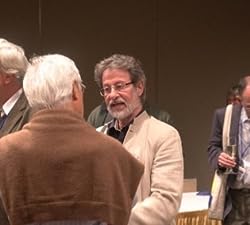 Erel Shalit is a psychoanalyst at Tel Aviv, Israel, and also past Manager of the Jungian Psychotherapy Program. He's former president of the Israel Society of Analytical Psychology, and also Director in the Shalvata Psychiatric Center.
He's the author of several books, including The Cycle of Life: Stories and Themes of the Journey; Requiem: A Tale of Exile and Return; Enemy, Cripple & Beggar; The Hero and His Shadow; and The Complex: Course of benefitting from Archetype to Ego , and The Dream and its Amplification (ed., with Nancy Swift Furlotti).
He's introduced and edited Erich Neumann's Jacob and Esau: About the collective symbolism of the brother theme, as well as Murray Stein edited Turbulent Times, Creative Minds: Erich Neumann and C.G. Jung in Relationship.
Articles of his have appeared in many newspapers, among many others Quadrant, The Jung Journal, Spring, and Midstream. He's entries in The Encyclopedia of Religion and Religion. 'Silence is the Middle of feeling,' a meeting with Erel Shalit, seems in Robert and Janis Henderson's "Living with Jung" volume, also at Pythia Peay's America on the Couch. He has given the chapter on Jerusalem at Thomas Singer's publication Psyche and the Town: A Soul's Guide to the Modern Metropolis, and 'My Australian Animus' at Joerg Rasche and Thomas Singer (eds) Europe's Most Souls. Dr. Shalit lectures at professional institutes, universities and ethnic forums from Israel, Europe, and the United States.

Erel Shalit has 1 products available for sale in the category of Books.