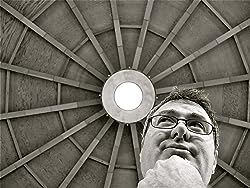 Andy Colvin is an eclectic artist, photographer, filmmaker, publisher, musician, and bestselling writer, who has been called the "Sultan of Slack," that the "Sherlock Holmes of all Synchroconspiracy," and "among America's amazing, pain-in-the-butt original pioneers." Colvin was one of the founders of the "xerox" or "street art" movement now popular in galleries worldwide, and was also one of the first "spoken word" musicians. Because he was the first showman at Austin to emphasise that the "idle" gospel of the Church of the Subgenius, Colvin has also been known as "the first Slacker."

Colvin's frequently controversial theories have left him a favorite speaker on areas such as Coast to Coast AM, Ground Zero, Destination America, The History Channel, The Travel Channel, SyFy, NPR, RAI, BBC, and PBS, and have gained him a committed "cult" following. In the past few decades, Colvin includes co-hosted popular conspiracy displays like "The Grassy Knoll," "The Stench of all Truth," and "The Church of Mabus," frequently focusing on the way the media mixes stories to subconsciously "manufacture consent" in the mind. More recently, Colvin has taken over editorship of their longest running comic publishing house in life, Saucerian (New Saucerian), based in the late 1940s from Gray Barker.

Following in the footsteps of his mentor, Fortean author John A. Keel, Colvin has blazed a 21st-Century course of investigation to mysteries that have influenced humanity for centuries, like UFOs, monster entities, magic, along with the psychology of the human mind. Colvin's approach is unique in that it combines a backdrop of genuine experience with decades of study. His Comprehension of art and symbology has, at times, allowed Colvin to connect dots that had pre

Andrew Colvin has 3 products available for sale in the category of Books.