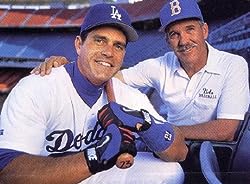 Gary Adams served as UCLA's head hockey coach for 30 decades, after playing at UCLA and also coaching at both UC Riverside and UC Irvine, carrying the Irvine team to two World Series Championships. Gary maintained one of the highest graduation rates in all of college baseball, while placing more players at the "bigs" than most but one additional trainer of his time. His time spent with close friend the excellent John Wooden caused the book "Conversations With Coach Wooden", although the other books had their infancy over thirty decades ago, but were burnt up in a California wildfire, leaving only the first typed manuscripts available. Utilizing those manuscripts, two already approved for novel, Gary and his wife of 32 years painstakingly reconstructed every one, and they're all now offered on Amazon as well as through other channels. Gary and Sandy both have surfaced involving them eleven books, some amusing, others real life tales. Both have new novels in the works.

Names such as Chase Utley, Tim Leary, Troy Glaus, Torey Lovullo, Dave Schmidt, Ron Roenicke, Don Slaughter, Mike Gallego, Todd Zeile, Bill Hasselman, Ricj Amaral, Eric Garros, Eric Byrnes, and also the newest Dodger manager, Davie Roberts, are among the dozens who went from the groups of Gary Adams to the big leagues. Gary's inimitable writing style and tender story-telling will stunt any reader and improve the minds of even the youngest readers. Books acceptable for ages 4 to 5 90 accessible through amazon or around the Adams Family site.

Gary Adams has 2 products available for sale in the category of Books.