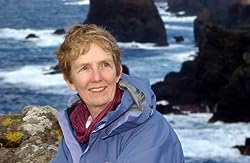 Ann is the author of the novels behind ITV's VERA, now in it's third series, and the BBC's SHETLAND, that will be aired at December 2012. Ann's DI Vera Stanhope collection of books is set in Northumberland and contains the well loved detective together with her spouse Joe Ashworth. Ann's Shetland series attract us DI Jimmy Perez, exploring from the mystical, dark, and lovely Shetland Islands...

Ann grew up in the nation, first in Herefordshire, then in North Devon. Her father was a village school instructor. After falling out of college she took a number of temporary jobs - child maintenance centre, women's refuge boss, bird observatory cook, supplemental coastguard - before heading back to school and training for a probation officer.

While she had been cooking in the Bird Observatory on Fair Isle, she met with her husband Tim, a visiting ornithologist. She had been attracted less from the ornithology than the bottle of malt whisky she found at his rucksack when she showed him his chamber. Soon after they wed, Tim was appointed as warden of Hilbre, a small tidal island nature reserve in the Dee Estuary. They were the sole residents, there was no mains power or water and entry to the mainland has been in low tide throughout the shore. If a person's not heavily to birds - and Ann isn't - there is not much to do on Hilbre and that was when she started composing. Her very first set of crime novels comprises the older naturalist, George Palmer-Jones. A couple of those books are seriously dreadful.

Back in 1987 Tim, both Ann and their two brothers moved into Northumberland and the north west gives the inspiration for many of her subsequent titles. The women have both consumed with Geordie lads. In the fall of 2006, Ann and Tim ultimately achieved their dream of moving back to the North East.

For Your National Year of Reading, Ann was made reader-in-residence for just three library authorities. It came as a sin tha

Ann Cleeves has 10 products available for sale in the category of Paid in Kindle Store.