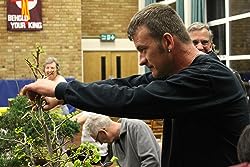 Harry Harrington was born in Oxford, UK in 1970 and after 20 years in and around Manchester Currently lives in Aylesbury Close to the Chiltern Hills.

Harry began bonsai as a hobby nearly 20 years ago whilst working as a gardener. Harry started working as author and a bonsai artist in 2000.
His site www.bonsai4me.com started life as a group of personal notes about bonsai which were published as 'Species Guides' from 2001; the first comprehensive research of plant species suitable for bonsai accessible online. Ever since then Bonsai4me has increased on an yearly basis and now attracts over 1.5million distinct visitors each year from around the globe.
The success and popularity of this 'Progression Series' (posts and photo-series showing the development of a bonsai over many years) at Bonsai4me.com has led to Harry writing and publishing 3 books on the topic through B4MePublishing; Bonsai Inspirations 1 originally published in 2011, Bonsai Inspirations two printed in 2012 and also an upgraded version of Bonsai Inspirations 1 (2nd Edition) in 2014. Copies of those titles are distributed around the world to almost 40 countries.
Harry's first book based on Bonsai4me.com itself, '' 'Bonsai Basics: The Foundations of Bonsai' was originally released as an e-book just in February 2013, but was then published in paperback on March 20th 2015.

Harry continues to compose for bonsai4me.com and additional books are intended for the future. He conducts workshops and teaches and is commissioned to undertake work on customer's trees. Harry specializes in turning quality material to works of art and loves the challenge of styling 'unsuitable' material for bonsai.
Harry seldom reveals his trees to the public, preferring to keep a comparatively low-profile within the normal Club and Show circuits.

Harry Harrington has 3 products available for sale in the category of Books.