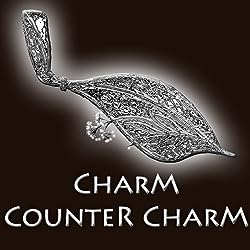 Harper Peace is the author of this Charm Counter Charm series of brief stories and books.

Biography: I'm convinced I'm not so intriguing. Let me tell you about the books instead.

Picture a civilization that had no use for papyrus or paper. Everything believed important was inscribed on clay tablets: accounts, taxes, the movements of the planets as well as the jewel-like accounts of moments in people's lifestyles, written down - so they said - from magical means.
Time moves. Many of these records crumble to dust, others have been lost forever, and still more are dissolved from the waters that lie beneath the sands. Incredibly, some survive the centuries: a few by sheer fortune, a few by being the victim of passion, which divides their clay to your hardness which communicates the millennia.
Now, when we look back at that amazing civilization, we see largely blackness, but it's a dim illuminated by the occasional shooting star of some moment of someone's life, captured in clay.

That is how I hope the first few tales from the lands of those sweet waters will seem to you: small glimpses into the shadow of time.
The first, Squire Chloe's Demon, informs how Chloe battled against a shadow that arrived to get her.
At the next, Another Side of Destiny, we fulfill with two other people of the Town of the Sun, no sword-wielding squires those, but a few searching for their route between fate and destiny.
The third and shortest narrative, Clay to get Ellen, occurs a generation later. It is of a man who wishes to find the truth behind masks. His narrative would likely not have been recorded - too slight in the larger scheme of things - except that he becomes a pawn in the games of others. His path intertwines with that of Alia, a sister of this seal.

From the Charm Counter Charm Sequence, arriving in 2017, we wholeheartedly

Harper Peace has 3 products available for sale in the category of Free in Kindle Store.