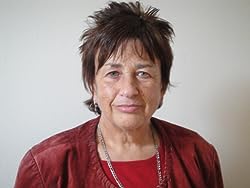 She worked as a helicopter teacher for several decades, instructing for various flying schools on Robinson R22s and R44s. She has also flown 30+ other helicopter types, had a private pilot's licence for aeroplanes, and had a go at flying microlights, gliders, as well as even balloons.

Helen has been writing professionally for many years and now contributes regularly to several aviation publications and sites. Before getting involved in aviation she walked 5,000 miles round the coast of Britain, obtaining a 'Guinness Book of Records' entry. She wrote in this adventure in her very first publication 'Midges, Maps & Muesli', now available in both print and ebook formats. After she became a pilot followed this up with 2 aviation books - 'The Helicopter Pilot's Companion', and 'Flying Helicopters - a companion into the PPL(H)'. Helen was nominated for the Aerospace Journalist of the Year award in 2004, for an article about flying helicopters in Russia. She is also a former Newsletter Editor for the BWPA (British Women Pilots' Association).

Helen lives in a small village in Derbyshire in England, having a Terrific view of the Peak District. She has travelled widely, and written a book about her journeys - 'Travels on Seven Continents'. She shares her life with her partner David along with their four cats. The cats have led to a additional book (and maybe more in the pipeline), but are not any help whatsoever in regards to composing, thinking their job is to sit on your computer keyboard!

Helen Krasner has 1 products available for sale in the category of Paid in Kindle Store.

Helen Krasner is rated 6 out of 10 based on 1 reviews.