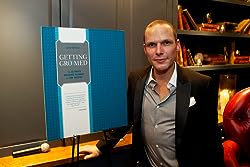 Jason Mitchell is the Wedding Planer at Shiraz Events.

Jason is also an accomplished playwright. His show THE BOYS UPSTAIRS, relationships, a humor about sex, relationship and the lines in between, premiered at the 2009 New York International Fringe Festival where it played with an run and received critical praise. In 2011 the Fringe Festival, which produces 200 plays encouraged THE BOYS UPSTAIRS to be a part of its 15th Anniversary Series honoring the top 15 displays of 15 years.

Jason's first play THE RED BOX, also a historic gay love story, premiered in 2006 at Tribeca. Jason has lectured with this play in Montreal, Connecticut, New York, Poland, Prague and Israel. It is still shown in academic settings.

Jason resides in Manhattan's Upper West Side with his spouse Michael. They were one of several couples that fought in New York for marriage equality, also got engaged just before the state recognized same-sex union.

Jason Mitchell has 1 products available for sale in the category of Books.