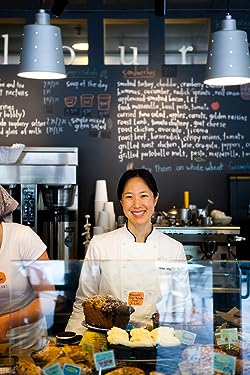 An honors graduate of Harvard College with a degree in Applied Mathematics and Economics, Joanne abandoned a career as a management consultant to put in the world of cooking.

She started as garde-manger cook in Boston's renowned Biba restaurant, subsequently worked as a pastry cook in Bentonwood Bakery at Newton, and in 1995 was hired as Pastry Chef in Rialto restaurant in Cambridge.

Joanne transferred to New York City in 1997 to work from the cake department of this critically acclaimed Payard Patisserie and Bistro. Returning to Boston a year later with dreams of starting her own salon store, she brought her American and French instruction to Mistral where she had been the Pastry Chef till summer of 2000.

Back in 2000, she opened Flour, a bakery and café, at Boston's South End. Flour comprises breakfast pastries, cakes, breads, cookies, and tarts in addition to sandwiches, sandwiches, and sandwiches. Flour currently has 4 places in Boston and Cambridge having 3 more locations opening up by 2017.

Joanne's playful dedication to excellence goes beyond the kitchen. She writes articles articles and reviews for Fine Cooking magazine. She teaches courses and guides pastry cooks both inside the bakery and in area cooking schools. She started a Chinese restaurant called Myers + Chang with her husband Christopher Myers in the South End neighborhood in the fall of 2007. An avid runner, she's competed in each Boston Marathon from 1991 - 2006. She is the author of the cookbook "Flour", "Flour Too", "Baking with Less Sugar", and also the upcom

Joanne Chang has 3 products available for sale in the category of Books.