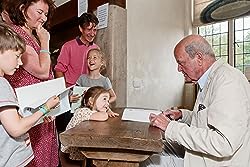 John Burningham studied illustration and graphic design at the Central School of Art, graduating with distinction in 1959. Many example commissions followed including renowned posters for London Transport, before the publication of Borka: the Adventures of a Goose with No Feathers, John’s publication for kids (Cape, 1963) which won the prestigious Kate Greenaway Medal for illustration and heralded the launch of an extraordinary profession.

Tug of War has been republished in 2012, and a special variant of Borka, celebrating 50 years in print, premiered in June 2013. Picnic appeared in the fall of 2013 and the Best Way to the Zoo was released in the UK in 2014. Chitty Chitty Bang Bang is observing its 50th season in print with a small variation in hardback to be printed in 2015.

John is married into the illustrator, Helen Oxenbury. They have three children, three grandchildren and a puppy named Miles. They live in London.

John Burningham has 1 products available for sale in the category of Books.

John Burningham is rated 10 out of 10 based on 1 reviews.