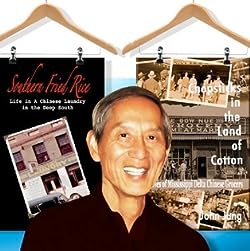 Following a 40 year career as a Professor of Psychology, in 2002 that I started to reflect on several areas of my private development and returned to some question I had avoided many occasions, namely, how do I, because a second-generation Chinese American match at a predominantly white and black society.

I grew up in Macon, Georgia, in which I had been born to Chinese immigrant kids that operated a laundry through the years before the civil rights era. Ours was the only Chinese family in town, so it was hard for me to understand who I was, ethnically speaking. Even later we moved to San Francisco when I was an adolescent, it was still tricky for me to know what it supposed to be a Chinese American as I had been so distinct from the San Francisco Chinese who'd lived so tightly among other Chinese most of their lives.

My efforts to understand how my ethnic identity arose led me to write a memoir "Southern Fried Rice: Life at A Chinese Laundry in the Deep South," in 2005. I soon realized from favorable responses from audiences and readers when I gave book talks/signings all over the U. S. that this was a significant story to preserve and share. Several men and women, by way of example, shared that they too grew up in ethnic isolation in which they had been the only Chinese individuals in their own communities or in addition they grew up helping in their own parents'laundry.

I never chose to write more than 1 novel about Chinese Americans, but in the course of doing research on to further my comprehension of why and how my parents ended in Georgia, and the way they were treated, I was inspired to write "Chinese Laundries: Tickets to Survival on Gold Mountain" (2007) that analyzed the vital role that this cultural business had for Chinese immigrants for more than a century all over the U. S. and Canada.

A third publication in 2008, "Chopsticks at the Land of Cotton: Length of Mississippi Delta

John Jung has 4 products available for sale in the category of Books.