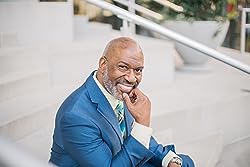 John F. Lofton, named after President John F. Kennedy, has been born and raised in Mobile, Alabama—the last city on the coast before Mobile Bay. He served 6 years in the U.S. Marines and is thankful for both his state and coastal breeding.

He's profoundly intense, intellectually insightful, emotionally inspiring and socially relevant. He is enthusiastic about his call to be a pastor in the area of Indian Trail, as well as his profession in business and technology. His reach has no boundaries—in kids to youth and from seniors to everyone else in between—he is dedicated to extending his obligation of equipping the saints for their Ministry's work.

Equipped with a fantasy, and a exceptional type of teaching he has been asked to minister to diverse congregations, denominations and non-profit organizations. His messages are all relevant, powerful, insightful and hard-hitting. With amazing care and excellent courage, he attempts to serve his police departments, school districts, and even those in offices and positions of jurisdiction and legislation in a bid to help bridge the gap between members and community. He has conducted marriage conferences/boot camps/retreats and adult conferences that offer tools which help others know what a Covenant relationship resembles and is enthusiastic about preparing others for marriage in addition to preserving loving and successful marriages. He believes in helping unmarried individuals recognize who they are in Christ and how to differentiate a counterfeit relationship.

In January of 2007, '' he and his wife initiated a Bible study in their house and it was that this Bible study which God used to start a church in May of 2007.

John F. Lofton has 1 products available for sale in the category of Paid in Kindle Store.