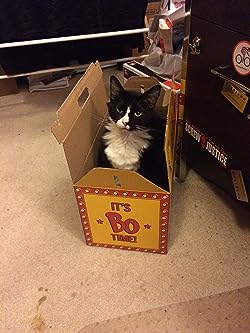 John G. Hartness is a teller of tales, a righter of wrong, defender of women’ nonetheless, and a few people call him Maurice, for he speaks of the pompatus of love. He's also the bestselling writer of the EPIC-Award-winning series The Black Knight Tales from Bell Bridge Books, an fantasy show which answers the eternal question “ aren’t there fat witches? ”

A graduate of Winthrop University, John lives in Charlotte with his wife Suzy and also a very rough cat. He has been light designer, a performer consultant, salesman, electronics tech, and arts administrator. He set his functionality degree to good use from the early 2000s, when he served as President of both the Metrolina Theatre Association and the North Carolina Theatre Conference and Managing Director of the Off-Tryon Theatre Company.

Since turning from point to page, John has published over 20 short stories, half a dozen novels, a fantastic fistful of novellas, and several anthologies. John is the author of this Bubba the Dragon Hunter collection of shorts, the Quincy Harker, Demon Hunter novella collection, as well as the creator and co-editor of the Big Bad anthology series, among other endeavors.

In 2016, John awakened using a pair of additional publishing business ne’er-do-wells and based Falstaff Books, a publishing conglomerate dedicated to pushing the boundaries of literature and entertainment.

In his copious free time John enjoys long walks on the beach, rescuing kittens from trees and documenting new episodes of this podcast Authors & Dragons, at which he plays a Pathfinder match with five other fantasy authors. John can be a contributor to the Magical Words category blog. An Magic: the Gathering player, John is strong in his nerd-fu and has been referred to as “the Kevin Smith of Charlotte, NC. ” And not just

John G. Hartness has 5 products available for sale in the category of Paid in Kindle Store.