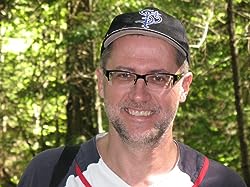 I was born in Fargo, North Dakota, however the Veterans Administration transferred my dad into Kansas when I was 2, and I grew up going to Catholic schools. I attended Washburn University on a scholarship for 2 years (and took my first creative writing course from Tom Averill, a writer I admire to this day), but dropped my scholarship and dropped out and worked for the Santa Fe Railroad. After the railroad set off me, I used my railing unemployment benefits to go back to school also obtained a degree in mathematics.

I worked as an editor in small-town newspapers in Kansas for a couple of years, then went to Europe and worked without a visa at a youth hostel in Edinburgh, Scotland. 1 day at the hostel, I discovered a copy of For Whom the Bell Tolls on the communal bookshelf. By the time I got into the last sentence—"He could feel his heart beating from the pine needle floor of the woods"—his childhood desire to become a writer had reawakened.

It required a couple more decades, but I finished up at the University of Arkansas MFA program, where I met a green-eyed poet, Katrina Vandenberg. Katrina and I moved to Saint Paul in 2001. I’d never dwelt, however my great-great grandfather, Theodore Wiemann, turned into a U.S. citizen at Saint Paul at 1856, soon after the city was established, and owned a saloon and grocery downtown. My great-grandfather, Michael Reimringer, clerked for Theodore and boarded with the household; family legend has it that Theodore was unhappy when Michael and his daughter, Anna, in 1880 wed. Michael affirmed his father-in-law’s doubts after, following fathering four kids he dropped off the back of a sleigh got drunk in the second-ever Saint Paul Winter Carnival, and cracked his skull.

After Katrina and I proceeded to Saint Paul shortly after my father’s departure in 2001, Vestments, the book I’d been wo

John Reimringer has 1 products available for sale in the category of Paid in Kindle Store.

John Reimringer is rated 8 out of 10 based on 22 reviews.