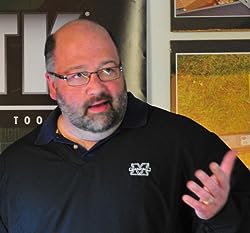 John Sammons is an Associate Professor and the Interim Chair of the Department of Forensic Sciences at Marshall University.

He also serves as the Manager of the Digital Forensics and Information Assurance Program.

John is the author or co-author of many books and book chapters such as the best-selling “The Basics of Digital Forensics” released by Syngress. In 2013, “The Basics” was nominated for Digital Forensics Book of the Year by Accreditation 4. This book is presently in its second edition and has been translated into Korean.

His other publications include “Digital Forensics: Threatscape and Best Practices,” and “The Basics of Cyber Safety: Computer and Mobile Device Safety Made Easy. ” John co-authored the electronic forensics chapter in Douglas Ubelaker's publication "Forensic Science: Current Issues, Future Directions." The book is co-published using all the American Academy of Forensic Sciences. John also authored the digital forensics chapter in the book "Information Security: A Strategic-Based Approach."

His next book, “Digital Forensics Trial Graphics: Educating the Jury through Effective Use of Visuals” is due to be published in the Spring of 2017 by Academic Press.

He's a former Huntington Police officer. John spent the vast majority of his career as a detective investigating drug trafficking in and around. John’s work was realized from the United States Department of Justice if he received their award for public service. John was among the lead guns and tactics instructors, while at HPD. Along with his teaching duties at HPD, he regularly educated patrol tactics in the West Virginia State Police Academy.

As a part-time investigator to the Cabell County (WV) Prosecutor's Office, John acts as a part-time examiner from the West Virginia State Police Digital Forensics laborato

John Sammons has 1 products available for sale in the category of Books.