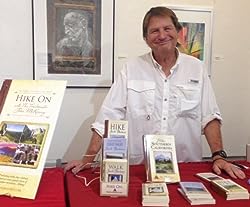 John McKinney is the author of 30 books about trekking, parklands and character, such as "Hiking on the Edge: Dreams, Schemes and 1600 Miles on the California Coastal Trail" and "Hiking the Holy Mountain: Tales of Monks and Miracles on the Trails of Mount Athos, Greece."

John shares his distinctive trail philosophy and the many psychological, physical and even spiritual advantages of hiking in "The Hiker’s manner" as well as with a few of his favorite talks, “Getting Back to the Nature Trail. ” For 18 years, he composed a weekly walking column for the Los Angeles Times, and the intrepid Eagle Scout has hiked and enthusiastically explained more then ten million miles of trail around California and around the U.S.

John, '' The Trailmaster, has composed more than a thousand stories and articles about trekking, hundreds of regional best-selling guidebooks, such as "Hike Southern California: A Day Hiker’s Guide" and "Day Hiker’s Guide to California’s State Parks," and created The Trailmaster Pocket Guide Series now numbering a dozen novels. John, A Californian is the only one to have visited and written about all 265 California State Parks and to solo-hike the entire length of the California Coast.

A fervent advocate for hiking and also our want to reconnect with nature, John McKinney shares his experience on radio, TV, online, and as a public speaker. He is currently in development with Hike On, a half-hour series about trekking for television.

John McKinney has 15 products available for sale in the category of Books.