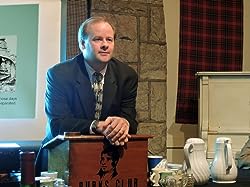 Jonathan W. Jordan, writer of "AMERICAN WARLORDS: How Roosevelt's High Control Led America to Victory in World War II" (NAL/Caliber 2015); the New York Times bestseller "BROTHERS RIVALS VICTORS: Eisenhower, Patton, Bradley, and the Partnership which Drove the Allied Conquest in Europe" (NAL/Caliber 2011); and the award-winning publication "LONE STAR NAVY: Texas, the Fight for the Gulf of Mexico, and the Shaping of the American West" (Potomac Books 2007). He's a contributing author to "The Armchair Reader: World War II" and "The Armchair Reader: The Incredible Book of World History," and the editor of the Library of Texas edition of "To the People of Texas," by Texas Navy Commodore Edwin Ward Moore. His writing has emerged from World War II History, Armchair General, Military History, World War II magazine, and MHQ: The Quarterly Journal of Military History.

A native of Savannah, Georgia, Jon grew up on Air Force bases, from which his dad flew C-141 Starlifters to the Military Air Command during the Vietnam War. He lived before 1976 in New Jersey, Ohio, and also the Philippines, when his family moved to Selma, Alabama. Jon acquired an accounting degree from Samford University in Alabama, Birmingham and his law degree from Vanderbilt University. Before going to Marietta, Georgia, he practiced law in Texas. He lives in Marietta with Kate, his wife, along with their three children. He practices commercial litigation and bankruptcy law in the firm King & Spalding LLP.

When not cheering from fencing and basketball, hiking, shooting, or swimming, Jon is working on his next book, on women as military leaders.

You'll be able to view more about Jon's forthcoming books at his site, jonathanwjordan.com , or his Facebook author page.

Jonathan W. Jordan has 1 products available for sale in the category of Paid in Kindle Store.