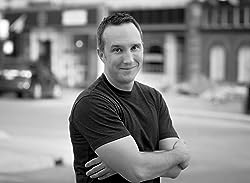 I took with this mortal coil in 1976 in Omaha, NE. As an only child, my parents were able to dedicate their existences into catering to my every whim. My Mother started by studying the newspaper to me, ensuring I had been up to speed on current events. Once I'd outgrown the paper, she moved on to Golden Books. I read my first book, Cujo, at the next grade. It hooked me and I chose to main-lining books and functioning the libraries such as an eight-year-old junky looking to score his second fix. I have been an avid reader ever since, throwing my lot with Frank and Joe Hardy, the three researchers, and later, Roland Deschain and his ka-tet.

I duped Uncle Sam into thinking I'd one day make a great leader of men, and that he immediately shipped me off into the United States Military Academy in West Point, NY, where I languished in a turmoil of emotions which ranged from apathy to not giving a damn. This lent me to writing angst-filled poetry and short stories when I should have been paying attention to class or learning in the barracks, thus leading to the refinement of my craft and lending credence to this familiar idiom--you understand, silver linings and everything.

Back in 1998, I graduated from West Point and was commissioned as a second lieutenant in Army Aviation. I attended flight school in Alabama, in which I needed to wear cool sunglasses and a leather jacket, and some thing about helicopters. Forgive me. It had been several years back, and my memory is fading faster than a cheap tattoo.

At 2013, I decided to hang up my cool shades and leather coat and don a pocket protector and masking-tape-repaired glasses, transitioning from Army Aviation into Operations Research and Systems Analysis. I'd spent the past fifteen years perfecting my skills and building a solid foundation of understanding, so I figured what better time than the twilight of my career to throw all that out the window and Begin from scratch in an entirely n

Joseph John has 1 products available for sale in the category of Paid in Kindle Store.