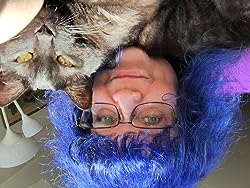 Jody has also composed in the Walt Disney world, especially for approximately Disneyland and Walt Disney World with such novels as "Popping Up Around Walt Disney World," "Disneyland Challenge," and eight decades of souvenir books for both parks. For Disney's live-action films, she co-authored "Pirates of the Caribbean: The Pirate's Guidelines" and "Treasure Planet: A Voyage of Discovery." Early in her career, Jody wrote for DC Comics about the Looney Tunes and Tiny Toons comic books, and for MAD Magazine. Her screenplay "Rap Tap Tap" was filmed and shown on HBO.

Jody was raised by a pack of folksingers in the town of Massapequa on Long Island, New York, and currently resides in New York City. A graduate of New York University, she attended Northwestern University and Berklee College of Music,

Jody Revenson has 4 products available for sale in the category of Books.