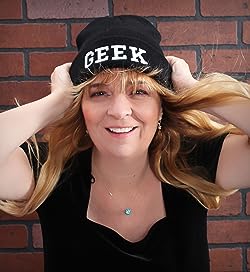 Julie Moffett writes from the genres of historical romance, mystery and paranormal romance and is a bestselling writer. She has won a Lot of awards, such as the 2014 Mystery & Mayhem Award for the Best YA/New Adult Mystery, the esteemed 2014 HOLT Award for the Best Novel with Romantic Elements, also a HOLT Merit Award for Best Novel by a Virginia Author (double!) , the 2016 Award of Excellence, a PRISM Award for the Best Romantic Time-Travel AND Best of the Finest Paranormal Books of 2002, and the 2011 EPIC Award for Best Action/Adventure Book. She has garnered extra nominations for Daphne du Maurier Award its Bookseller's Best Award and the Gayle Wilson Award of Excellence. Her novel A Double-Edged Blade was an Amazon #1 Best-Selling Book. She's sold over 100,000 copies puzzle collection, of her Lexi Carmichael geeky.

Julie is a military brat (Air Force) and has traveled extensively. Her more exciting exploits involve attending high school in Okinawa, Japan; backpacking around Europe and Scandinavia for several months; a year-long college graduate research at Warsaw, Poland; and a great visit to Scotland and Ireland where she fell in love with castles, kilts and brogues.

Julie includes a B.A. in Political Science and Russian Language in Colorado College, a M.A. in International Affairs from The George Washington University in Washington, D.C. and an M.Ed from Liberty University. She's worked as writer, journalist, teacher, librarian and a proposal writer. Julie has two sons and speaks Polish and Russian.

See a TV interview about the Lexi Carmichael series with Julie at: https://www.youtube.com/watch?v=nnnFYR16tLc

Julie Moffett has 4 products available for sale in the category of Paid in Kindle Store.