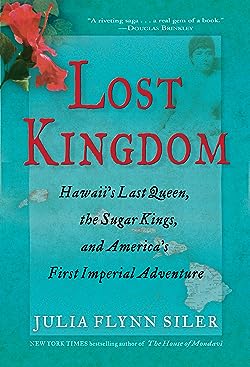 Julia Flynn Siler is a bestselling author and writer. She wrote LOST KINGDOM: Hawaii's Last Queen, that the Sugar Kings, and America's First Imperial Experience and THE HOUSE OF MONDAVI: The Fall and Rise of an American Wine Dynasty, that were both New York Times bestsellers. An award-winning journalist and former foreign correspondent for The Wall Street Journal, she lives in Northern California with her husband and 2 sons. She is now at work on a background set in San Francisco's Chinatown at the turn of the 20th Century, forthcoming from Alfred A. Knopf. Please visit www.juliaflynnsiler.com to find out more.

Julia discussed Lost Kingdom on NPR's All Things Considered on Sunday, February 26th. To listen to the meeting with Weekend Edition Sunday host Guy Raz or to read the excerpt on NPR's site, please visit http://n.pr/zdhxvd

Why would You Opt to write a book about Hawai'i?

A couple of decades ago, my loved ones and I had been invited to spend the weekend at a ranch near San Francisco owned by some family members. In a tour of the house, they swung open the door of the old barn. Inside was a treasure trove of exactly what collectors call "Hawaiiana" - fierce-looking totems, grass skirts, feathered staffs, and carved wooden bowls called calabashes. That's when I started thinking about the ties between California and Hawai'i - and began to wonder if some of the terrific fortunes on the West Coast had their roots in the seas.

Just how can you follow up on this hunch?

Shortly after visiting that particular barn, I went to the library searching for books that might explain the cultural and commercial ties between both Hawai'i and California. One, in particular, caught my attention; it had been about Claus Spreckels, a twentieth century business tycoon whose nickname has been

Julia Flynn Siler has 2 products available for sale in the category of Books.