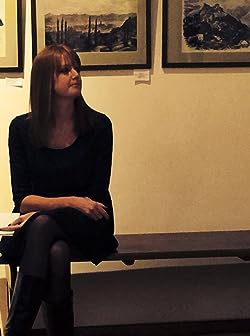 Born in the United Kingdom in 1981, I have spent the last 12 years teaching and living in Spain, New Zealand and the Republic of Georgia. I've got two lovely young brothers and a handsome little boy and now I am an English Language Expert and since Copy-Editor for many cultural and business newspapers in Tbilisi. I am also the Editor-in-Chief of Georgia Today, Georgia's major English language newspaper.

Blood Omen is a project I've been working on very happily for some time and it gives me such a thrill to see it finally on the global 'shelf' to allow others to read!

What started me composing Blood Omen, the five book vampire saga?
A dream. I understand- it's happened to other authors too... I woke up one day, late January 2005, using a very clear picture in my mind I found myself sitting up in bed in my childhood room. It was night and the window had been open. I could see the silhouette of a man vampire sitting at the pub- one foot resting on the sill and an elbow resting lightly on his knee viewing me in silence (if we had a dialogue in that dream, it had been lost when I awakened). But that image of him sitting- powerful, shadowy, cryptic; reckless and attractive- was irresistible and just has been written around! I chose his name was Elias. And so the very first character within my Blood Omen saga was born. And from that point on, my narrative began to weave itself.

I have been composing and thinking up stories because I was very young, and I started writing vampire fiction once I was two- although I never believed to create any real effort to get anything published. I once tried to explain to some friend exactly what it was like to make a story from nothing: I said that, in my situation and with Blood Omen Particularly, I felt as if the story was already complete in my head, but there was a wall between me and it, and every day that I sat at the computer and started to type, a Bit of that wall gram

Katie Ruth Davies has 2 products available for sale in the category of Paid in Kindle Store.