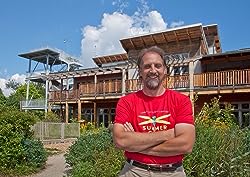 Ken Leinbach is a nationally known science educator and leader in environmental instruction. He has had fun easing the grassroots attempt to produce and develop the Urban Ecology Center. The middle’s formulation of using environmental education as a tool for inspirational urban revitalization has grabbed the eye of urban planners and teachers throughout the globe.
Ken and the Urban Ecology Center are featured in local and national media outlets, such as The New York Times, Milwaukee Magazine, Orion Magazine, Milwaukee Public Television, and also in Richard Louv’s bestselling book, The Child in the Woods.
Ken discusses on a variety of topics, such as sustainable design, urban ecological education, planetary conditions of concern, discovering prosperity, the energy of story, leadership, fundraising, green dwelling, the practice of play, and the meaning of life based on the letter -- he hopes soon to turn into his next publication (ask him about it!) .
Ken is a certified high school teacher and has more than 30 decades of experience teaching and developing ecological science programs from Wisconsin, Michigan, and Virginia. He holds a biology degree from Antioch College, a master’s degree in environmental education from Prescott College, and an honorary doctorate of fine arts in the Milwaukee Institute of Art and Design. His awards record is long, and contains the Thomas Jefferson Medal for Natural Science (Virginia), Nature Educator of the Year by the Roger Tory Peterson Institute (New York), the Martin Luther King Award from St. Mark African Methodist Episcopal Church (Milwaukee), along with Green NonProfit Leader of the Year from the Milwaukee Business Journal.
Ken is currently a member of this Governor-appointed Wisconsin’s Coastal Management Council, and is currently a founding member of the Academy of Systems Change, an global leadership program focused on international shift. He resides in the area where he works and ru

Ken Leinbach has 1 products available for sale in the category of Paid in Kindle Store.