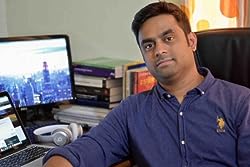 Abhilash (@abhilashgb) is a virtualization professional, author, designer, plus a VMware vExpert (2014, 2015 and 2016) who specializes in the areas of data center virtualization and cloud based computing systems.

He is a VMware Certified Advanced Professional in Data Center Administration (VCAP4-DCA and VCAP5-DCA). He also holds VMware certificates, such as VCP-Cloud, and VCP3, VCP4, VCP5, VCP6-DCV. He has been in the IT industry for over a decade and has been working on VMware goods and technology.

Abhilash GB has 1 products available for sale in the category of Books.