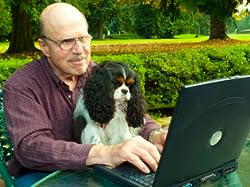 I'm a former anthropologist who has been writing mysteries and thrillers since 1982, having won the Edgar for Old Bones, in addition to a subsequent Agatha (with my wife Charlotte), and also a Nero Wolfe Award. My important continuing series includes forensic anthropologist-detective Gideon Oliver, "the Skeleton Detective."

Lately, I have seen myself referred to as "the father of the modern forensic mystery," and, by gosh, I think I'm! Before "Fellowship of Stress," the very first Gideon Oliver, released in 1982, you'd need to really go back 70 years and more to Austin Freeman and his Dr. Thorndyke series. Between both good doctors (Thorndyke and Oliver), there was only Jack Klugman's "Quincy," as far as I know, and he had been a TV character.

The Gideon Oliver novels have been (approximately) translated into a major ABC-TV series and also have been collections of the Book-of-the-Month Club, the Literary Guild, and the Readers Digest Condensed Mystery Series. My work was published in a dozen languages. Charlotte and I reside on Washington's Olympic Peninsula, our union having lived (more or less intact) our collaboration on books and short stories.

Although I have been a full-time writer for a while now, I also remain active in real-life forensics by functioning as the forensic anthropologist about the Olympic Peninsula Cold Case Task Force.

Aaron Elkins has 1 products available for sale in the category of Books.