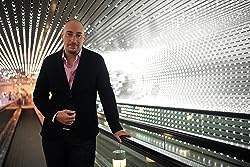 Adam Bradley is a New York Times best-selling writer on popular culture and a scholar of American literature. His commentary has appeared on PBS, NPR, also C-SPAN in Addition to in the Washington Post, the Los Angeles Times, the New York Times, and the Wall Street Journal.

Adam is the author or editor of several publications, including Book of Rhymes: The Poetics of Hip Hop, The Anthology of Rap, Ralph Ellison's Three Days Before the Shooting..., along with Ralph Ellison at Progress. Back in 2011, he collaborated on the memoir of Common with the celebrity and rapper FrequentIt'll All Make Sense.

Adam's latest book, The Poetry of Pop (Yale University Press, 2017), encircles a century of recorded music. Inside, Bradley outlines the tune lyric throughout genres from early twentieth century Delta blues to century stone ‘& bull#x2019; roll to today’s hits. As Bob Dylan’s most triumph of the Nobel Prize in Literature indicates, an evaluation of the music legends’ value since art is timely and resonant. At once a work of musical interpretation, cultural analysis, literary criticism, and personal storytelling, Pop's Poetry illustrates how music and words come together to create poetry that is persuasive , frequently where we are least prepared for it.

What combines Adam's work is his belief that the most powerful cultural expressions are equally the product of innovation and tradition. This vernacular process of fusing the inherited or even the helps explain the beauty we find by an epic poem to a rap freestyle, from a classical symphony to some gutbucket blues.

Adam's work has garnered considerable attention from critics, scholars, and readers alike. The Novel of the Year, the San Francisco Book Festival, and even the New England Book Festival Awards all honored The Anthology of Rap among the best anthologies of 2010. Both New

Adam Bradley has 1 products available for sale in the category of Books.