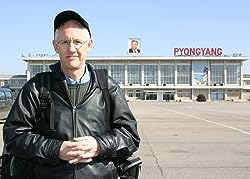 Blaine Harden is journalist and an author whose latest publication is the Fighter Pilot and The Great Leader, which Amazon chosen among the greatest publications of 2015. It gained a 2016 citation from the Overseas Press Club of America. The book tells the story of North Korea's Great Leader captured energy and plunged his country into war against the USA while the youngest fighter pilot from his air force played with a high-risk game of deception. Following years of planning, the fighter pilot made a life, also fled North Korea Russia fighter jet, at a MiG-15.

Blaine is also the author of Escape From Camp 14, a New York Times and worldwide bestseller that has been translated into 28 languages. It is the story of Shin Dong-hyuk, the only man born and raised into a prison camp to retreat to the West. Escape from Camp 14 won the 2012 Grand Prix Biographie Politique was a nonfiction finalist for the Dayton Literary Peace Prize, and has been featured on 60 Minutes.

Blaine leads to this Washington Post, Foreign Policy, PBS Frontline and The Economist. A longtime foreign correspondent, he worked from Africa, Eastern Europe and Asia, in Addition to in New York and Seattle for The Washington Post. He was likewise author for the Times Magazine and a roving national writer for The New York Times.

Blaine is also the author of A River Lost. It is about well-intentioned Americans (such as the author's father) that dammed and degraded the West's greatest river, the Columbia. The New York Times called it a "hard-nosed, tough-minded, clear-eyed dispatch on the type of contentious subject that is almost always distorted by ideology or obscured by a fog of sentiment." An updated and revised edition of A River Lost has been published in 2012 to coincide with a PBS American Experienc

Blaine Harden has 2 products available for sale in the category of Books.