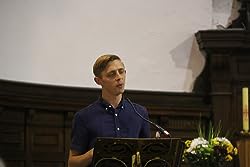 Brandan Robertson is humanitarian, a Christian thought-leader, and commentator, operating in the intersections of sexuality, spirituality, and renewal.

Brandan is the author of Nomad: A Spirituality For Travelling Light and writes regularly for Patheos, Sojourners, and The Huffington Post. He has published dozens of articles in respected outlets such as The Washington Post TIME, Religion News Service, and Dallas Morning News. As sought out commentator of religion, culture, and public life, he's a regular contributor to international media outlets and has been interviewed by outlets such as MSNBC, NPR, SiriusXM, TIME Magazine, The Wall Street Journal, The New York Times, along with TheAssociated Press.

Acclaimed as among “the very hope-inspiring young Christian leaders”, Brandan is an sought-after speaker and consultant to churches, denominations, conferences, and universities. He's executive director and the founder of Nomad Partnerships, a non-profit operating to equip and empower faith leaders around the globe to be advocates for human rights. He served as the immediate past national spokesperson of Evangelicals and functions to the United States 'State Department's Sub-Working Group on LGBT and Religion + Issues.

Brandan earned his Bachelors Degree in Pastoral Ministry & Theology from Moody Bible Institute and is pursuing his Masters of Theological Studies from Iliff School of Theology. He currently resides in Denver, Colorado.

Brandan Robertson has 1 products available for sale in the category of Books.

Brandan Robertson is rated 8 out of 10 based on 11 reviews.