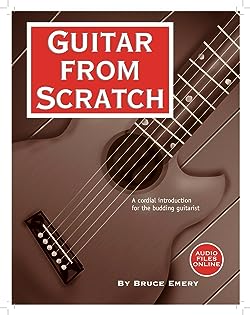 It occurs to me that you might love to know a little about the actual Bruce Emery, beyond the customary glamour, media hype and pop celebrity deification.

Some of my earliest musical memories are of playing along with my mother in the car on long trips; she adored to harmonize and she would get me to sing the tune. She could accompany my grandma's mandolin playing and played a baritone ukulele. (Grandma played for dances as a teen growing up in Sweden.)

I still have this old ukulele. I can remember times when I would sit and lightly strum the open strings, gaze through the soundhole in the lighthouse printed onto the inner label, then shut my eyes and dream about ...world domination...I suggest, fluffy puppies gamboling at the bud! ...no, really it had been world domination. The one thing stopping me was that I wasn't big enough to cross the street on my own.

At the age of nine, I took piano and organ lessons for a while and then proceeded on to really playing the stupid ukulele--older tunes from the '40s and '50s that I gleaned from my mom's songbooks. The guitar came at about the age of twelve. I guess I had a few gigs in my "first stage," like playing for Christmas celebrations at school, acting old Smothers Brothers routines in the fourth grade and also singing "A Boy Named Sue" in a square dance retreat.

At 15, I started studying classical guitar, and this really turned me on to fingerstyle guitar. However, while I loved a few of the Preludes and Villa-Lobos Etudes and do, I had been more attuned to popular music, both instrumental and vocal, and I gravitated to the likes of James Taylor, the Beatles, Chet Atkins, Jerry Reed and Pierre Bensusan (still my favs). I played at dormitory steak dinners in the University of Maine, at a gin mill in Bly, Oregon, and even on an Global television production, "Dick Stacey's Countr

Bruce Emery has 1 products available for sale in the category of Books.