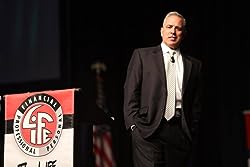 Chris Brady is businessman, speaker, humorist, and a NY Times best-selling writer. His novels include "Launching a Leadership Revolution" (co-authored with Orrin Woodward), "Rascal", "A Month of Italy", "PAiLS", "Leadership Lessons from the Age of Fighting Sail", "Financial Fitness", "Beyond Financial Fitness" and also various other names on leadership and success. He's sold more than two million books in eight languages.

Chris is currently a principle Creator of LIFE, has served on its Board of Directors since its inception, and is now the CEO and Creative Director. He is also the Executive Publisher of Obstacles Press, also among the Founders of All Grace Outreach, also a 501(c)(3) charitable organization.

Initially trained as an engineer, Mr. Brady received his BA in Mechanical Engineering at Kettering University and his Master of Science in Manufacturing Engineering at Carnegie Mellon University at a General Motors Fellow, with Master's Thesis work completed at Toyohashi University in Japan.

He also has among the planet's most distinctive resumes; such as experience using a live bug in his ear, then walking via a paned-glass window, chickening out from the high-dive in elementary school, ruining the course ant-farm in third tier, losing a spelling bee on the word "use," jack-hammering his foot, and more recently - sinking his snowmobile in a lake.

In case you can not locate Chris talking in front of a live crowd, or at his workplace writing, or in a bookstore, or even playing with his children, or about the sideline of a soccer pitch, or in the hills of Tuscany, or even outside the lake, or try looking in the Subsequent Online places:

Chris Brady has 2 products available for sale in the category of Books.