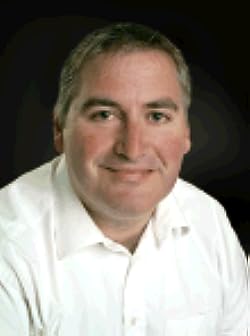 Writer spotlight
Chris Riddell is the co-creator of the bestselling Edge Chronicles series, together with Paul Stewart. He has illustrated many children’s novels including the award-winning Pirate Diary. He is also the political cartoonist for the Guardian and Observer newspapers.

Talking to Paul Stewart & Chris Riddell about the Edge Chronicles

Q. What was the inspiration for The Edge Chronicles?
Paul: The Edge Chronicles started away using the map. Chris drew on it and gave it to me saying, 'here's your world, tell me exactly what occurs there.'
Chris: I drew a map that looked like the edge of a map because I’ve always been fascinated with all the advantages of maps - the location where the famous world ends.
Paul: My principal inspiration for the Deepwoods was perhaps the fairy tales of the Brothers Grimm, though other books–Alice in Wonderland and Through the Looking Glass, Gormenghast, Gulliver's Travels– also played their role.
Q: What exactly was your favorite style(s) to create?
Chris: my favourite character is the spindlebug. It had been easy for Paul to write that it had been see-through, like glass, but a struggle to get an illustrator to draw. The animals live an immense quantity of time–up to four decades –meaning that they see far more history of this Edge.
Paul: My favourite characters would be the banderbears. Chris drew them. Because they seemed ferocious, I left their character more timid. We've enjoyed making a language all of their own, learning about habitat and their habits and growing the animals as the show has improved.
Q: Where did you think of the names on your characters? The many personalities and lifestyle stories?
Paul: Both of us despise the clichéd dream names and tried to make the names in the Edge planet somewhat different. Wood

Chris Riddell has 2 products available for sale in the category of Paid in Kindle Store.