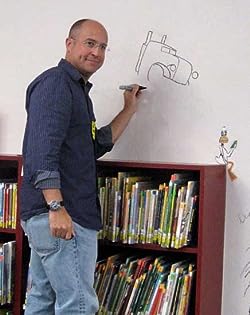 Chris Gall has been drawing pictures for as long as he can recall. His teacher suggested that he could turn into an artist a day, when he was caught doodling in his desk at 2nd grademade him wash the desks in the classroom. In seventh grade, a Read Magazine Young Writers Award was won by Chris, and that motivated him to create stories to go with his art. After graduating from the University of Arizona, Chris became a award-winning illustrator, and his art such as Newsweek, Time, People, Fortune, The New York Times, and The Washington Post.

In 2004, his first picture book, America the gorgeous, became a Publishers Weekly Best Children’s Book of the Year, and his career in kids’s publishing started. Since that time he's written and illustrated eleven more novels, including the acclaimed Dinotrux, a 2009 Publishers Weekly Best Children’s book, Dog Vs. Cat, Revenge of those Dinotrux, Awesome Dawson, and Substitute Creacher. Back in August of 2015 Netflix began airing Dinotrux, an animated television series produced by DreamWorks.

Chris has also worked as an adjunct professor of art at the University of Arizona and spent four decades as a professional live-in comic. He lives in Tucson, Arizona.

Chris Gall has 1 products available for sale in the category of Books.