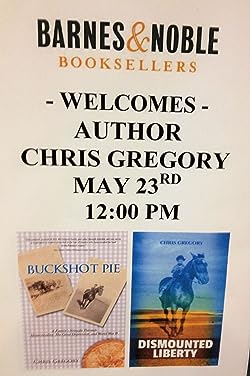 In addition to his own paperback and hardcover formats of "Buckshot Pie", Chris has introduced that non-fiction World War II book, his first, on Kindle Edition. Additionally, Chris has another book "Dismounted Liberty" which is available at Amazon in paperback or Kindle Edition. "Dismounted Liberty" while dealing with World War II is a creative non-fiction work with real events, yet this offering incorporates probable dialogue and internal monologue. In addition, our writer has introduced three fiction books. "Straight Like a Sapling" delves in the battles, tragedies, and also successes of Coach Bear around the Colville Reservation in northeastern Washington State. " We Also Exult" explores the events in the life of Beaver Pakootas and his family as they experience catharsis and undying love. And finally, "Farewell Hokusen Maru" is a historical fiction fighting World War II and the adventures of Robbie Oakes, a farmboy who finds herself in a struggle for existence as a POW.

Chris Gregory has 2 products available for sale in the category of Paid in Kindle Store.