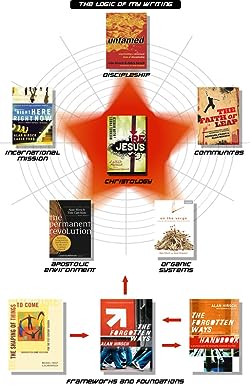 Alan Hirsch is the director of The 5Q Collective, 100Movements, Forge Mission Training Network, along with Future Travelers. Every one is focussed on developing leadership and organization. Known for his innovative approach Alan is regarded as crucial mission strategist and a thought-leader for churches around the Western world. Hirsch is the author of The Forgotten Ways; 5Q; The Shaping of Things To Come, ReJesus, and The Faith of Leap (together with Michael Frost); Untamed (with Debra Hirsch); Right Here, Right Now (together with Lance Ford), and On the Verge (together with Dave Ferguson).

Alan is currently co-founder and adjunct faculty for its M.A. at Missional Church Movements at Wheaton College (Illinois). He is also adjunct professor at Fuller Seminary, George Fox Seminary, Amongst Others, and he lectures regularly throughout Europe, Australia, and the United States. He's also an editor of Leadership Journal, and series editor for #x 2019 & Baker Books ; Shapevine show, #x 2019 & IVP; s Forge lineup.

His expertise in leadership involves leading a local church movement among the most marginalized in addition to heading up both the Mission and Revitalization function of his denomination. He has been a mission service planting churches, together with Christian Associates on leadership staff. Alan is adjunct professor at Fuller Seminary and lectures frequently throughout Australia, Europe, and the U.S.

A NOTE ABOUT MY BOOKS: FROM ALAN HIRSCH
Lots of men and women ask me if there's some rationale and logic of the various writings or whether they are arbitrary reflections on various subjects related to the missional church. Given that with the book of The Permanent Revolution in February, I've finished my "library" of missional publications, I believed that it is well worth describing the rationale behind my authorship for this stage. So for those who are considering, this is the way it goes. .

Alan Hirsch has 3 products available for sale in the category of Paid in Kindle Store.