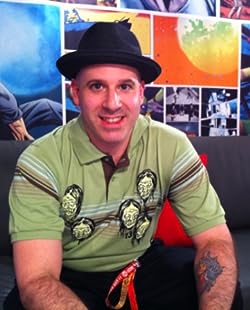 Alan Robert is the bestselling creator of several critically-acclaimed IDW Publishing titles, such as: The Attractiveness of Horror: A GOREgeous Coloring Book, The Beauty of Horror 2: Ghouliana's Creepatorium - The following GOREgeous Coloring Book, Crawl to Me (in development to act as a motion picture), Killogy, and Wire Hangers. Robert is also known as the bassist/songwriter for the favorite rock band Life of Agony for more than two decades.

In July 2011, IDW Publishing released the first problem of "Crawl To Me," a stunning horror comic series from founder Alan Robert. The story, about a young family made to cope with a string of troubling events, was applauded by Ain't It Cool News for being "stunning and terrifying." Fangoria promised that "viewers will be ignored by the story and art of the psychological thriller," and ComicMonsters.com fans voted it "Best Mini-Series of the Year" (beating out top-selling books Hellboy along with Locke & Key).

Less than six months after, IDW released "Crawl to Me" as a graphic book that accumulated all four themes of the original show. The book sold out in days of its release. Shortly after, it was declared that the acclaimed mini-series has been to be a live-action feature film with David White and screenwriters TJ Cimfel attached. In 2013, a completed screenplay captured the attention of manager Victor Garcia (Gallows Hill) who promptly signed on. The "Crawl to Me" movie will be made by founder Alan Robert and his producing partners Jeff Mazzola (Descent) and Chris White (V/H/S Viral).

"I remember feeling awestruck the first time that I saw the completed version of this picture book," says Alan. "I did not think there could be much greater feeling of accomplishment. But the notion of the book becoming a feature movie is really mind-blowing. I've read the scre

Alan Robert has 3 products available for sale in the category of Books.