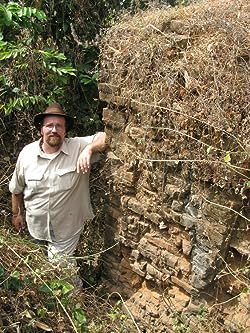 Adam Bray is an illustrator, photographer, composer (you'll find his music in other areas of Amazon) and author. He started his career working with chimpanzees, then moved on to exploring villages and ancient ruins in Southeast Asia. Adam has led to guidebooks for Time Out, Insight Guides, Berlitz, Thomas Cook, DK Eyewitness Travel, Things Asian Press and AA. He chased hobbits before returning to some lifelong enthusiasm, and also has also written for BBC, CNN and Nat Geo: Star Wars. He is the author of "Star Wars Rebels: The Visual Guide", "DK Star Wars: What Makes a Killer?" And also a contributing writer for "Ultimate Star Wars." He's got Marvel names and Star Wars also.

Five things Adam has enjoyed ingestion: Deep-fried squid teeth, grilled entire bullfrogs, durian fruit (which some say smells like dead things but I say tastes like devotion), popcorn crickets, and minced rat beef with rice and bread noodles, although not chargrilled rat together with the hair still stuck into it, because only tastes bad.

Five matters Adam is not fond of: Giant centipedes in my bedroom late at night, the smell of pet meat soup, key Communist agents, chimpanzee poop in my hair, and hot fashion trends.

The character Adam would most like to play in a Star Wars movie: A Hutt gangster, since scoundrels would be the most enjoyable! See all Adam Bray products