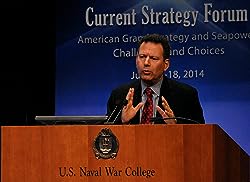 Robert David Kaplan (born June 23, 1952 in New York City) is an American writer of several publications on politics mostly foreign affairs and travel, whose job more than three decades has appeared in The Atlantic, The Washington Post, The New York Times, The New Republic, The National Interest, Foreign Affairs and The Wall Street Journal, among other papers and publications.

His more contentious documents about the nature of US power have spurred criticism and debate in academia, the media, along with the highest levels of the government. One of Kaplan's most influential articles include "The Coming Anarchy", printed in The Atlantic Monthly in 1994. Critics of the article has compared it to the Clash of Civilizations thesis of Huntingon, since Kaplan civilizations and presents conflicts in the world. Another subject in the work of Kaplan is cultural and historical tensions suspended through the Cold War's reemergence.

From March 2008 to spring 2012, Kaplan was a Senior Fellow in the Center for a New American Security at Washington, which he rejoined in 2015. Between 2014 and 2012, he had been chief analyst at Stratfor, a private forecasting company that is worldwide. In 2009, Kaplan was appointed by Secretary of Defense Robert Gates to the Defense Policy Board, a national advisory committee on the United States Department of Defense. In 2011, '' Foreign Policy magazine called Kaplan among the world's "top 100 global thinkers."
Bio from Wikipedia, the free encyclopedia. Photo from Rosalie Bolender [CC BY 2.0 (http://creativecommons.org/licenses/by/2.0)], via Wikimedia Commons. See all Robert D. Kaplan products