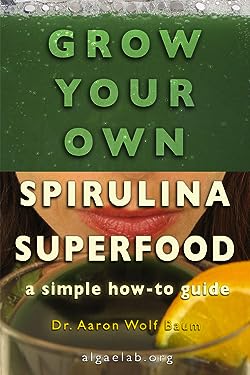 Visit ALGAELAB.ORG to find out more regarding Grow Your Spirulina kits, workshops, and supplies!

Dr. Aaron Wolf Baum graduated summa cum laude in Physics from Harvard and received his Ph.D. in Applied Physics from Stanford University. While still focusing on the NASA OMEGA algae project A founding member of the Chlorophyll Collective algae schooling undertaking that was interactive, he founded the Shipyard instruction lab in Berkeley, CA. After founding AlgaeLab.org at 2008, he co-founded two new algae firms -- GreenSpring, an advanced algae farm from the San Francisco Bay Area, and SpiraLife, a programmer of consumer-oriented, turnkey algae superfood photobioreactors. Aaron is writer of the recently-published book, "Grow Your Own Spirulina Superfood: A Simple How-To Guide." See all Aaron Baum products