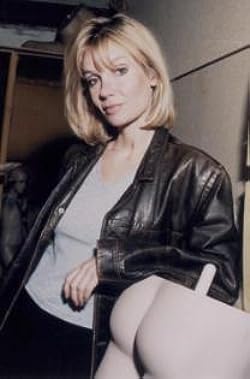 Mo Hayder (born 1962) is a British writer of crime and thriller fiction.

She is the author of eight books. Her introduction, Birdman, has been released in January 2000 and was an worldwide bestseller. Her second novel, The Remedy, was a Sunday Times bestseller and won the 2002 WH Smith Thumping Good Read award. Her third book, Tokyo, was printed in May 2004 and was a second Sunday Times bestseller. Tokyo was released as The Devil of Nanking in the USA in March 2005. Pig Island was her fourth best seller and has been released in April 2006. Pig Island was nominated for both a Barry Award for Best British crime book, along with a CWA dagger. Her next book, Ritual was the first from The Walking Man collection, and has been nominated for CWA Ian Fleming Steel Dagger award. Skin is the second publication from The Walking Man series, and has been released in early 2009. Gone, the next publication from The Walking Man collection, premiered in February 2011; it won the Edgar Award for Best Novel. Her publication Hanging Hill was published 2011, and Wolf at 2015.

Hayder left school at fifteen, and has worked as a barmaid, security guard, film-maker, hostess in a Tokyo club, instructional secretary and a teacher of English as a foreign language. Hayder has an MA in film by The American University in Washington DC, and also an MA in Creative Writing from Bath Spa University.

Her debut novel, Birdman, has been published in 2000 to wide acclaim. Even though some reviewers found the book (which concerns a serial killer using a specially vicious modus-operandi) overly violent and disturbing, the novel became an international bestseller. Birdman introduced subscribers to DI Jack Caffery, a character who showcased in Hayder's second book, The therapy. The Treatment tackled themes of paedophilia. DI Caffery returned Hayder's recent novels Ritual, Skin, Gone, and Wolf, which she calls the Walking Man collection.